THE QUESTION IS NOT JUST: TO BE OR NOT TO BE?

THE QUESTION IS: WHO/HOW DO YOU WANT TO BE? 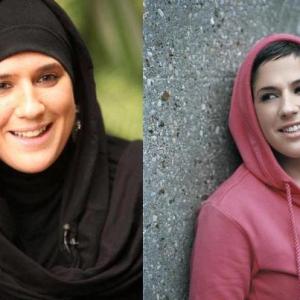 French rap star Diam’s (born Mélanie Georgiades) shed some light on her conversion to Islam, after a few years of silence. Only 32 years old, she recently published a revealing autobiography, explaining the matter. While some people regard her decision as proof for an ongoing “Islamization of Europe” (from the right wing), or as proof for the fact that “she lost her mind”, or that “she gave in to the false consolations of irrational religious beliefs” (from the left field), other observations are possible.

This line struck me in an interview she gave for French radio (click here for more information):

Commenting on her decision to wear a veil or hijab, she said: Pour certains, une femme qui porte le voile le fait forcément sous la contrainte. Mais non! Ca peut être par amour aussi, pour Dieu… (translation: To some, a woman who wears a veil does this because she is forced. On the contrary! It can equally be done out of love, for God…).

What some people fail to realize in Europe’s secularized society is the nature of traditional spiritual experiences, which also explains why they don’t understand decisions like Diam’s to wear a hijab. “Spirituality” today is often reduced to relaxation techniques or management tricks, helping people with busy schedules to cope with the demands of a performance oriented social life. But that’s not what spirituality in the traditional sense is about. A spiritual experience befalls us, and inspires us to question ourselves and our way of life. It literally inspires us to critique systems of oppression we help to sustain. This kind of self-critique is truly liberating, and cannot be reduced to the world we were functioning in until then, precisely because it looks at that world from another perspective. This is exactly the kind of experience which drew Diam’s to Islam.

Talking about her life before her conversion to Islam, Diam’s said in an interview: “I was very famous and I had what every famous person looks for, but I was always crying bitterly alone at home, and this is what none of my fans had felt.”

She added: “I was heavily addicted to drugs and went to a mental asylum to recover, but this was in vain until I heard one of my Muslim friends say ‘I am going to pray for a while and will come back.’ I told her that I wanted to pray as well.”

Recalling that moment, Diam’s continued: “It was the first time that I touched the floor with my head, and I had a strong feeling that I had never experienced before, and I believe now that kneeling in prayer shouldn’t be done to anyone but Allah.”

So, the first question any convert seems to ask (whether it is a Christian like Ignatius of Loyola or a Muslim like Diam’s), is:

WHAT HAS BEEN THE SOURCE OF MY EXPERIENCES OF JOY AND OF SORROW,

Diam’s, like Ignatius of Loyola, had been leading a life of ambition, pride, competition, and she was led by a desire for recognition, fame and power. And like Ignatius, she discovered how this kind of life gave her joy when ambitions seemed to be fulfilled, but it also made her sad when some things didn’t work out the way she planned. Moreover, new ambitions kept coming up. In short, she was suffering from a hunger that was never satisfied. She discovered how she tried to live up to the expectations of her fans, and how this enslaved her. She was kneeling to an image of herself as the admirable idol her fans wanted her to be.

Kneeling to Allah, on the other hand, apparently meant that Diam’s no longer bowed to the demands of the music and entertainment industry. It was a turning point in her life. It enabled her to free herself, and to criticize the priorities in her life. From now on, she would seek and explore another source of motivations for her life. It was a source that had always been there, but that she had forgotten about: LOVE. Not love for one’s admirable self-image or some other idol, but self-transcending love for others.

It’s good to know that spirituality does not liberate us from pain and suffering,

but spiritual reflection enables us to distinguish between two possible sources of happiness or grief:

IS IT MERE AMBITION

OR IS IT LOVE FOR MYSELF AND OTHERS WHICH MAKES ME HAPPY OR SAD?

Diam’s discovered how obeying to the demands of love – “divine” because of its unexpected awakening from outside the perspective of her life until then – liberated her to experience a different kind of sadness, and a different kind of joy. She consciously made a choice to place a higher value to the source of these latter types of feelings. Or, put differently, she discovered this truth:

Make no mistake, secularized readers. Converts like Diam’s don’t ask themselves first whether or not God exists to become “believers”. THAT IS NOT THE QUESTION! Converts like Diam’s get a clear vision on the reality of their lives and inner motives, and question these after experiencing the reality of love in a profound and often unexpected way. They are also aware of the historical and situated character of this experience. Regarding this, another line struck me in the interview I mentioned at the beginning of this post. Commenting on her discovery of the Holy Qur’an, Diam’s said: J’ai ouvert ce livre, comme j’aurais pu ouvrir autre chose… (translation: I have opened this book, like I could have opened something else…).

So, God is always higher. The Holy Qur’an is not itself God. The Bible is not itself God. These books are ways and means to another end, and should not be idolized as ends in themselves. Some people are Muslim. Others are Christian. Others atheists. And so on. But each and every one of us has the potential to experience the liberating reality of love and compassion. Knowing that you could have defined yourself as a Muslim if you would have been born in another part of the world doesn’t mean that you should stop being a Christian, or an atheist for that matter. It’s like you shouldn’t stop loving your wife knowing that you would have met someone else if you would have been born in another part of the world. We are historical creatures, and the way we discover the liberating reality of love depends on some arbitrary circumstances. Some experience Islam as a source of oppression, which forces people (especially women) to act and behave in a certain way. Others, like Diam’s, experience the opposite: Islam as a liberating force in a world ruled and consumed by neverending ambitions. The same goes for other religious as well as atheist convictions.

Anyway, Diam’s testimony on dealing with a religious tradition deserves to be imitated, doesn’t it? Being in Istanbul, earlier this year, and visiting some beautiful mosques, I can imagine some aspects of Diam’s experience with kneeling to Allah. It is indeed astonishing to realize that you aren’t perfect as a human being, and that you will never be able to completely perfect yourself. It is liberating to realize the vanity of ambitions that can never be fully satisfied, the vanity of a hunger that just keeps coming… and to give up on this hunger. It is liberating to drink from that other source… imitating, like so many others at different times and places, the one who said:

Those who drink the water I give will never be thirsty again. It becomes a fresh, bubbling spring within them, giving them eternal life.