“… the prostitutes are entering the kingdom of God ahead of you.”

[translated from a part in my book Vrouwen, Jezus en rock-‘n-roll]

What a disturbing figure. Jesus openly declares that tax collectors and prostitutes – quintessential sinners – are entering the kingdom of God ahead of the chief priests and the elders of the people of Israel. Go figure.

The chief priests and the elders think highly of themselves. They get recognition from the common people. Or so they think. They have a religious and social status worthy even of some recognition from “the One” Himself. Or so they presume. In comes Jesus. He basically tells them they are high on some grand illusion. He tells them what’s real. And he knows that they know what’s real, deep down inside. Let’s have a closer look at how Jesus proclaims the truth.

Jesus said, “What do you think? There was a man who had two sons. He went to the first and said, ‘Son, go and work today in the vineyard.’ ‘I will not,’ he answered, but later he changed his mind and went.”

“Then the father went to the other son and said the same thing. He answered, ‘I will, sir,’ but he did not go.

“Which of the two did what his father wanted?”

“The first,” they answered.

As he often does, Jesus tells a story to get his point across. This time it’s about a father and two sons. Basically, the second son is a hypocrite and the first son falls victim to the hypocrisy of his brother. Of course the father will think that the second son is the one who worked in the vineyard and appreciate him for it, while it’s his other son who did all the work. In other words, the second son will get the recognition that should actually be given to the first son.

Apart from the story of Cain and Abel, there’s another Old Testament story about two brothers that resonates throughout this parable of Jesus, namely the Genesis story of Jacob who deceitfully takes a blessing from his father Isaac. This particular blessing was normally reserved for his brother Esau, the firstborn. In the Genesis story (Genesis 27:1-46), Jacob (“he grasps the heel”, a Hebrew idiom for “he takes advantage of” or “he deceives”) is the one who gets protection. As is known, Jacob later becomes “Israel”, ancestor of the Jewish people.

By referring to the story of its ancestor Jacob, Jesus implicitly criticizes how Israel tends to build its identity and structure its society. Jesus criticizes social systems that rely on the exclusion of others through rivalry and hypocrisy. This criticism is at once general and personal. Jesus suggests in his parable that the chief priests and the elders are like the second son. In other words, he tells them that they are hypocrites! He also implies that the tax collectors and prostitutes are like the first son; they fall victim to the hypocrisy of the chief priests and the elders.

Of course the elders and chief priests deal with the tax collectors, but to protect their image they will deny any affiliation with “those collaborators of the Roman Empire who take money from their fellow Jews, in the process also fraudulently, deceitfully enriching themselves…” The reality of the situation is not that black and white though. It is no surprise that some of the chief priests and elders turn out to be as corrupt (or even more) as the tax collectors themselves. There is low life in high places. [AUDIO SONG TIP: Low Life in High Places by Thunder].

As for the prostitutes, Jesus suggests that they too suffer from hypocrisy. Indeed, when they meet a client in public, their client will deny any affiliation with them. Their client, be it a chief priest or an elder or someone else, might say “I don’t know the woman!”, and protect his reputation among the common people. And the prostitute, well, she has no choice but to forgive the hypocrisy of her clients beforehand. It’s part of the game she is forced to play. Otherwise she would lose all her clients. She plays forgiveness. [AUDIO SONG TIP: When You Were Young by The Killers].

Now we might understand a little better why Jesus claims that the tax collectors and prostitutes are “closer to the kingdom of God” and to the righteousness proclaimed by John the Baptist. They experience firsthand how mechanisms of social exclusion allow societies to structure themselves. They understand the injustice of many social systems. They know that acting against that injustice has to do with taking sides with the outcasts. To repent thus means to acknowledge that you yourself are part of a social game that’s played at the expense of others and to do something about it. It means “losing a life that is directed at a socially acceptable image/status/reputation/power” for the sake of “the excluded other”, the consequence being that you “gain your life” (as you no longer idolatrously lose yourself to an image).

Jesus himself always takes sides with the excluded others, and deeply understands the hidden truth behind our socially mediated identities. That’s why he says, after yet another parable (of the tenants) in the same chapter of Matthew’s Gospel:

‘The stone the builders rejected
has become the cornerstone;
the Lord has done this,
and it is marvelous in our eyes’

Because he is willing to take the position of the social outcast, Jesus is right when he proclaims the paradox of the Gospel (Matthew 16:25-26):

“For whoever wants to save their life will lose it, but whoever loses their life for me will find it. What good will it be for someone to gain the whole world, yet forfeit their soul?”

Of course, when you imitate Jesus and take sides with the socially excluded, there are two possibilities: or other people will show mercy, or they will sacrifice you as well. Jesus is willing to run this risk because the love for his neighbor is stronger than the fear of becoming a victim himself. He refuses to sacrifice himself to a socially acceptable self-image at the expense of others. He is in no ways a masochist. Jesus believes that his Father – Love – “desires mercy, not sacrifice” (Matthew 9:13). That’s why he indeed can save others but cannot save himself when he is arrested and crucified (Matthew 27:39-41). If he would start a civil war others would be sacrificed because of him, and he thus would no longer obey to the call of Love.

As we know, Peter at first does not imitate Jesus. Peter succumbs to the fear of becoming a social outcast when Jesus is arrested (see below, excerpts from Matthew 26). He denies any affiliation with Jesus because he fears becoming a victim himself. If, on the other hand, he would have taken sides with Jesus, he would have chosen for himself more fully (as he would not have chosen for his image or reputation).

Nevertheless, Matthew makes clear that the grace of Jesus indeed has to do with the grace of “prostitutes”. The Evangelist deliberately constructs a genealogy of Jesus (in the first chapter of his Gospel) wherein he mentions four Old Testament women who had a questionable reputation. Tamar and Rahab are known as prostitutes, Ruth is a seductress and Bathsheba, “Uriah’s wife”, is known as an adulteress…

Maybe one of the first steps towards the righteousness of “the kingdom of Love” has to do with the acknowledgment that our identities exist by receiving grace from those we tend to despise… To realize this might imply the tears that begin to wash our sins away, tears of true metanoia… as we follow in Peter’s footsteps.

Then Jesus told them, “This very night you will all fall away on account of me, for it is written: “‘I will strike the shepherd, and the sheep of the flock will be scattered.’ But after I have risen, I will go ahead of you into Galilee.”

Peter replied, “Even if all fall away on account of you, I never will.”

“Truly I tell you,” Jesus answered, “this very night, before the rooster crows, you will disown me three times.”

But Peter declared, “Even if I have to die with you, I will never disown you.” And all the other disciples said the same.

Now Peter was sitting out in the courtyard, and a servant girl came to him. “You also were with Jesus of Galilee,” she said. But he denied it before them all. “I don’t know what you’re talking about,” he said.

Then he went out to the gateway, where another servant girl saw him and said to the people there, “This fellow was with Jesus of Nazareth.” He denied it again, with an oath: “I don’t know the man!”

After a little while, those standing there went up to Peter and said, “Surely you are one of them; your accent gives you away.” Then he began to call down curses, and he swore to them, “I don’t know the man!”

Immediately a rooster crowed. Then Peter remembered the word Jesus had spoken: “Before the rooster crows, you will disown me three times.” And he went outside and wept bitterly.

This post follows the suggestions for a high school course on mimetic theory. The aforementioned situations are examples of the third type of the scapegoat mechanism (this time about SHAME and not ressentiment).

FOR MORE, CHECK OUT ANNIE LOBERT’S STORY ON HOOKERS FOR JESUS (CLICK TO READ)

CLICK HERE FOR PDF-FILE OF THE EXAMPLE IN MATTHEW 21 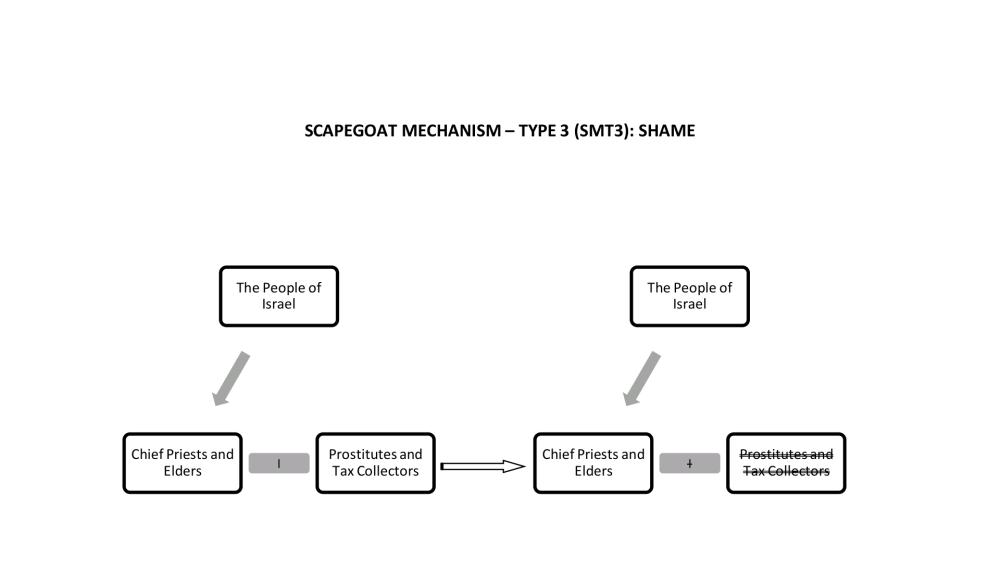 CLICK HERE FOR PDF-FILE OF THE EXAMPLE IN MATTHEW 26 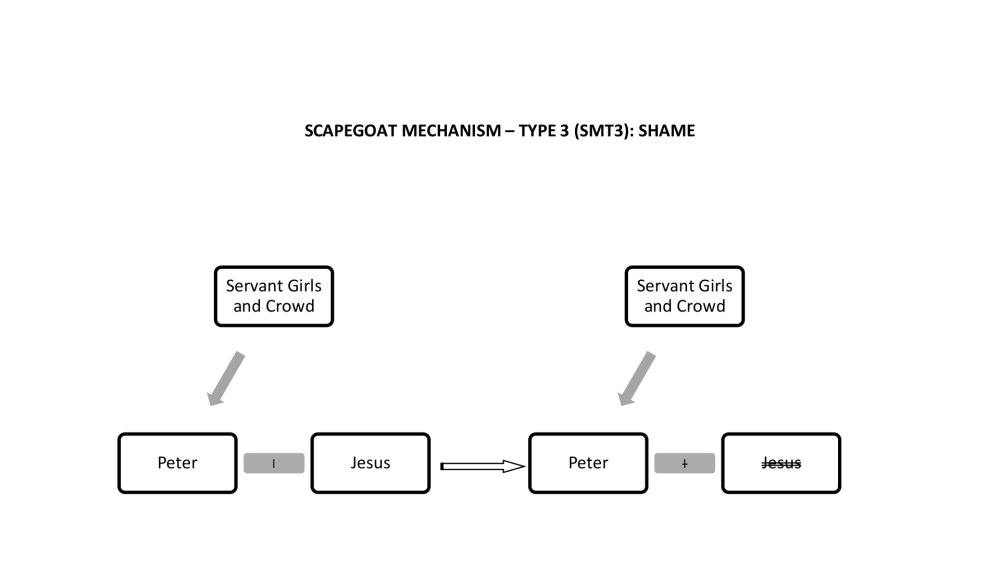 Here are the previous posts: