Students of psychology would not be surprised by some of the key statements made by René Girard and his mimetic theory.

Indeed social psychology time and again shows how people’s social behavior and self-concepts are shaped by imitation processes and scapegoat mechanisms, as stressed by mimetic theory. For instance, Stanley Milgram’s obedience study and the Stanford Prison Experiment show how powerful individuals as well as socially established abstract norms of “role” models are easily obeyed (imitated). The attribution theory teaches how someone tends to “blame” circumstances to justify his or her own “bad” behavior, while, on the other hand, he or she tends to hold others personally responsible for their “loathsome” conduct. Apparently, others are not so easily excused and appear as convenient scapegoats. People who play the blame game consider their own behavior to be “very different” from similar behavior in others. Insights into social identities reveal how gaining an identity through conformity (again by imitating others, of course) leads to stereotyping of and competing with others (as common enemies and scapegoats of one’s group). Here also, there is a tendency to exaggerate differences between one’s own group and other groups. The conduct of one’s own group is easily justified, while similar conduct of a competing group is considered “unjust”. 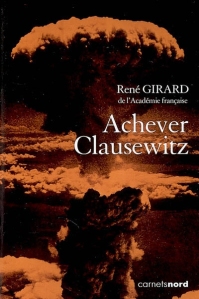 The problem, of course, is that competing groups imitate this reasoning for their own particular group and thus reinforce the rivalry between each other (read René Girard’s Battling to the End in this regard, on mimetic rivalry on a planetary scale – highly recommended!).

Not surprisingly, in light of mimetic theory, disobedience is more likely to occur:

People adapt to the social norms of the role assigned to them. Prisoners become distressed, helpless and panicky. Guards become nice, or “tough but fair”, or tyrannical.

Social cognition is an area of social psychology concerned with social influences on thought, memory, perception and all kinds of other cognitive processes. More specifically, researchers are interested in how people’s self-perception affects relationships, thoughts, beliefs and values. Here are some findings regarding attribution, factors in attitude change and conformity.

People are motivated to explain their own and others’ behavior by attributing its causes to situation or disposition. Again, not surprisingly in light of mimetic theory, people show the tendency to overestimate personality factors in explaining the behavior of others, while they underestimate situational influence. On the other hand, the concept of self-serving bias points to the fact that people often do the opposite when explaining their own behavior: people try to justify themselves.