In the Gospel of John, the devil is a personification of the scapegoat mechanism (which means that an innocent individual or group is wrongfully accused). Jesus knows that the leaders of the Jewish people, the Pharisees and the chief priests, want him dead and that they try to justify his death with certain lies. They obey “the devil” – indeed the mechanism that justifies the elimination of people based on lies. [Note that Jesus does not believe that God wants him dead. If Jesus paradoxically sacrifices himself eventually, it is a consequence of his obedience to a Love that “desires mercy, not sacrifice”. He does not want to live at the expense of others, not even his “enemies”…]

“If you, Pharisees, were Abraham’s children,” said Jesus, “then you would do what Abraham did. As it is, you are looking for a way to kill me, a man who has told you the truth that I heard from God. Abraham did not do such things. You are doing the works of your own father.”
“We are not illegitimate children,” they protested. “The only Father we have is God himself.”
Jesus said to them, “If God were your Father, you would love me, for I have come here from God. I have not come on my own; God sent me. Why is my language not clear to you? Because you are unable to hear what I say. You belong to your father, the devil, and you want to carry out your father’s desires. He was a murderer from the beginning, not holding to the truth, for there is no truth in him. When he lies, he speaks his native language, for he is a liar and the father of lies.“

The Pharisees and chief priests are afraid that the growing popularity of Jesus might become a threat to their power. That’s why they try to present him as a rebel leader who could lead an uprising against the Roman occupier of Judea. A war with the Romans would mean the end of the Jewish nation and culture. Therefore the Jewish leaders see no other solution than to get rid of Jesus. It’s their way of justifying his elimination.

Many of the Jews who had seen what Jesus did, believed in him. But some of them went to the Pharisees and told them what Jesus had done. Then the chief priests and the Pharisees called a meeting of the Sanhedrin.
“What are we accomplishing?” they asked. “Here is this man performing many signs. If we let him go on like this, everyone will believe in him, and then the Romans will come and take away both our temple and our nation.”
Then one of them, named Caiaphas, who was high priest that year, spoke up, “You know nothing at all! You do not realize that it is better for you that one man die for the people than that the whole nation perish.”

Some voices in Europe and the USA try to present the current Muslim refugees, coming from war zones like Syria and Iraq, as a cover-up, a “Trojan Horse” for Islamist terrorists who aim for world domination. The refugees are seen as a threat to the survival of “western nations” and “western culture”. In other words, they experience similar allegations as Jesus. 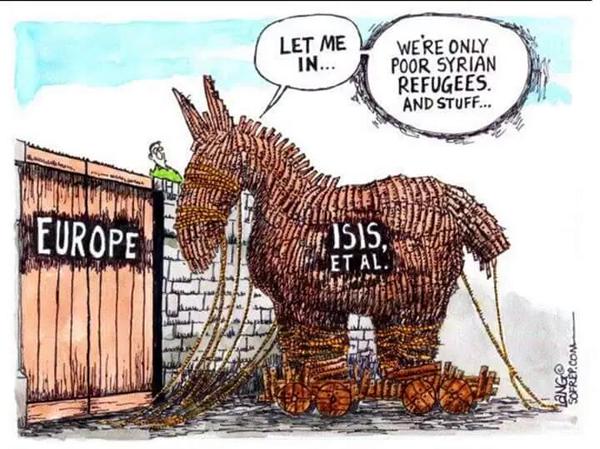 In the case of Jesus, the Gospel of John leaves no doubt that these allegations are false. The Evangelist lets Pontius Pilate, the Roman prefect, unwittingly declare “the truth” about the arrested Jesus, namely that Jesus is innocent. Jesus does not wish to establish a “kingdom” or “peace” in competition with “the kings of this world” (whose kingdoms are based on sacrifices and the expulsion of certain people – like the “Pax Romana”). In other words, the Gospel of John reveals the plot against Jesus by the Pharisees and the chief priests as a scapegoat mechanism: Jesus is wrongfully accused. He refuses to start a civil war that would mean the end of the Jewish nation and culture.

Pilate summoned Jesus and asked him, “Are you the king of the Jews?”
“Is that your own idea,” Jesus asked, “or did others talk to you about me?”
“Am I a Jew?” Pilate replied. “Your own people and chief priests handed you over to me. What is it you have done?”
Jesus said, “My kingdom is not of this world. If it were, my servants would fight to prevent my arrest by the Jewish leaders. But now my kingdom is from another place.”
“You are a king, then!” said Pilate.
Jesus answered, “You say that I am a king. In fact, the reason I was born and came into the world is to testify to the truth. Everyone on the side of truth listens to me.”
“What is truth?” retorted Pilate. With this he went out again to the Jews gathered there and said, “I find no basis for a charge against him.”

The equivalent question, from this perspective, is whether we have “a basis for a charge” against the Muslim refugees coming from war zones. Are they really part of a plot for Muslim world domination? Are they really a threat to the survival of western culture? Well, this is the truth, and this sacrifice (this Sacrifice) is unjustifiable: