It seems that, in order to understand international politics today (or maybe “as always”?), we need to understand what is happening in the Middle East. Well, at least we’ll get a major part of “the bigger picture” from our attempts to come to terms with the contagion of violence in that region. French American philosopher René Girard and his mimetic theory prove to be very helpful in analyzing the current situation. Let’s start, in this post, with what seemed to be a hopeful sign for the Arab World a few years ago, the Arab Spring.

In 2011 several Arab countries experienced political turmoil that, because of its revolutionary character, would later be described as “the Arab Spring”. The world could observe two patterns in this tumultuous period. On the one hand, in countries like Tunisia and Egypt, long term presidents were willing to give up their position, sometimes under pressure from the military. The free elections that followed were mostly won by Islamic political parties. The revolutions in Libya and Syria, on the other hand, turned violent because Muammar Gadaffi and Bashar al-Assad both refused to give up their presidency. NATO was willing and able to intervene in Libya and end Gadaffi’s leadership but could not undertake a similar action in Syria.

Despite NATO intervention, Libya doesn’t seem to be much better off than earlier, under Gadaffi’s dictatorship. The West allowed the same mistake to be made in Libya as the US made in 2003, in Iraq. Military, police and intelligence services were disbanded because of their association with the former regime. It would destabilize Libya as it did Iraq, leaving the nation to rivaling tribal militias. Moreover, it made Libya one of the most important exporters of weapons in the region. The political chaos in Libya had a direct influence on the Egyptian situation, and this in turn contaminated the Arab world as a whole. Many thousands of islamists and jihadists escaped the Egyptian prison during the revolution of 2011, regrouping themselves in the Egyptian Sinai Desert, and buying weapons from the Libyans (among others).

Meanwhile, the newly found political power of the Muslim Brotherhood (a movement with parties in different Arab countries) in Egypt came to an end. Egyptian army officials and generals seized power after the Muslim Brotherhood was held responsible for several terrorist attacks (although many of those attacks were claimed by Ansar Bait al-Maqdis, an organization linked to al-Qaeda). President Morsi, himself a Muslim Brother who briefly took the place of former dictator Hosni Mubarak, was replaced by former general Abdel Fattah el-Sisi, and membership of the Muslim Brotherhood was declared illegal – as it is in Syria. Anthropologist Mark Anspach predicted how the Arab Spring is, ultimately, indeed directed by the military in Egypt (read his very interesting article The Arab Rulers’ New Clothes by clicking here).

The question in all this is “How can Satan cast out Satan?” Consecutive Egyptian leaders more or less allowed the Muslim Brotherhood to organize itself, using it as a buffer against more extreme islamists and as a means to blackmail the West. If the West would not support the undemocratic, dictatorial regimes the only lurking alternative would be an extremist political Islam. That’s why the Arab Spring was also in general, in many respects, a movement carried out by religious forces against dictatorial regimes that were perceived as corrupted puppets from a decadent secularized West. It’s not what we, westerners, normally understand as democratization.

The dilemma between economically manipulable and manipulating dictatorships on the one hand, and political Islam on the other, is faced by the West again and again, to this day, in the Arab world. Bashar al-Assad knows this politically tricky situation for the West too. He wanted to use the threat of the so-called Islamic State (IS) to seek new alliances with the West and its Arab allies. Apparently he secretly allowed the jihadists to somewhat organize themselves so he could position himself as potential “savior”. False messiahs are the ones who create the disease they allegedly want to save the world from, but in order to be able to keep on playing “the doctor” they keep the world sick. However, it doesn’t really seem to work for Bashar al-Assad. His enemies didn’t become his friends, but surely it was worth the try from his perspective… 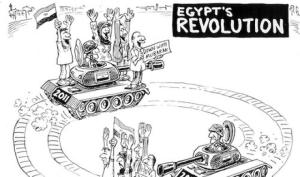 Anyway, the age-old enmity between dictators and so-called representatives of suppressed religious (and/or ethnic) groups provides each party with a reason of existence. As if life is not worth living if one doesn’t have an enemy… Moreover, both parties seem to remain blind to the fact that they resemble each other more and more as they tend to imitate each other’s violence and cruelty. René Girard speaks of mimetic doubles as rivals mimic each other in their (mutually imitated and thus reinforced) desire to obtain the same position. It’s no wonder that al-Qaeda and IS rival each other, indeed because (and not “although”) they are so much alike.

Of course, as René Girard righfully points out, enmity between rivaling parties can easily end if they find a common enemy that reunites them. It seems “the West” and what it stands for – its consumerist, so-called “decadent” culture – is well on its way to provide the competing extremists with that “Big Enemy”. Moreover, our consumerist culture alienates many of our own children too. Some of them become depressed, commit suicide because the consumerist way of life leads to feelings of “emptiness” and “unfulfillment” – the market demands that its consumers are never satisfied, that their desires are continuously (mimetically) awakened (read Thou Shalt Covet What Thy Neighbor Covets by Martin Lindstrom). Others find a new sense of identity and fulfillment in extreme political and/or religious groups. After the smoke clears, however, the satanic monster of violence coming from some of those groups is all that’s left, as humanity itself disappears in the process.

Tunisia remains a small beacon of hope amidst all these storms. The Muslim Brothers there were prepared to accept political concessions, the army did not intervene in the political process, and Tunisian president Moncef Marzouki was able to position himself as a “father of the people” instead of as a leader of one political or tribal party. The Tunisian example demands imitation more than ever, as we are confronted with the new face of horrific violence, the terror of ISIS. In many ways the war against ISIS shows how the West is fighting itself, the Arab world is fighting itself, and humanity as a whole, in this globalized world, is fighting itself.

Walead Farwana wrote a compelling article, The History of the Islamic State, on the ISIS movement. It is possible to shed some Girardian light on his writings by using the types of the scapegoat mechanism identified in previous posts.