This post aims at providing some more background information on a previous post regarding the film American Beauty (click to read “Scapegoating in American Beauty”). It explores the philosophical foundations of ressentiment.

In the world of philosophy there are two German names that automatically pop up regarding the discussion on ressentiment, namely Friedrich Nietzsche (1844-1900) and Max Scheler (1874-1928).

Friedrich Nietzsche discussed ressentiment primarily in his work Zur Genealogie der Moral (On the Genealogy of Morals/Morality – click here for pdf version of this book in English). In Nietzsche’s view, the Jewish-Christian foundation of morality grew out of the weaker men’s pride when these were confronted with a noble and aristocratic ruling group of stronger men. The weaker men, the slaves, reject the morals of the stronger men, the masters. The slave denies being envious of the master and develops a sense of superiority by claiming that the values the master lives by are not desirable at all. According to Nietzsche, Jewish-Christian slave morality triumphs over the master morality of Greco-Roman Antiquity when people start feeling guilty and ashamed about belonging to the group of masters. This is the ultimate revenge of the slaves for not being able to aspire to the same values as the masters. The slaves convince themselves and the masters that the slave morality (the inverse of the master morality) is the desirable model of life, and that the master morality is contemptible. 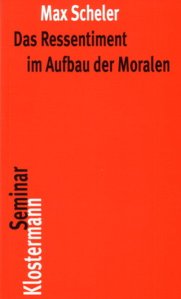 Max Scheler critiqued Nietzsche on these issues in his work Ressentiment. According to Scheler, Nietzsche’s account of ressentiment is very convincing, but he is wrong to consider it as the main source of Judeo-Christian tradition.

This is not the moment to discuss Scheler’s critique on Nietzsche. Regarding a further reflection on the film American Beauty and other examples of ressentiment, it is useful to merely focus on the characterization of ressentiment by Nietzsche and Scheler. In an article entitled Ressentiment and Rationality for the online philosophical and anthropological magazine Paideia, Elizabeth Murray Morelli summarizes as follows:

“Drawing on Nietzsche’s and Scheler’s accounts of ressentiment, we can sum up its internal structure. It is a cycle with the following constitutive elements: an original sense of self-worth; the apprehension of and desire for certain values; the frustration of one’s desire for those values; a sense of impotence to achieve those values: a sense of the unfairness or injustice of not being able to attain them; anger, resentment, hatred towards the bearer of those values, and often a desire to seek revenge; the devaluation of the originally sought values; repression of the desire for the devalued values and of negative affects such as hatred, envy, desire for revenge; a feeling of superiority over those who seek and possess the now devalued values; and a confirmed sense of self-worth. Ressentiment is a cycle inasmuch as it recurs. The person of ressentiment relives the desires and feelings which constitute the condition even as these affects are repressed. The cycle of ressentiment, significantly, begins and ends with a sense of self-worth.”

Applied to the character Frank Fitts in the film American Beauty, ressentiment is directed at the life of homosexual couples. The cycle of ressentiment then can be specified as follows: Frank Fitts gains his sense of self-worth by the social recognition he gets from the US Marine Corps (hence he presents himself continuously as “Colonel Frank Fitts, US Marine Corps”); he realizes that he actually desires certain relationships, namely homosexual relationships; he gets frustrated because he cannot fulfill this desire out of fear to lose his social recognition; he develops a sense of injustice: it’s not fair that certain people would enjoy a life as homosexuals and he seeks revenge for this injustice; he devaluates the originally desired life as a homosexual; finally he despises homosexuals in general and is convinced that they should feel ashamed; thus Frank Fitts develops a feeling of superiority over those who possess a life as homosexual couple, and this confirms his sense of self-worth.

From the point of view of René Girard’s mimetic theory, two important observations can be made: