A book that brings together some of the world’s leading scientists and philosophers who are investigating the enormous role of imitation in human life? It seems like a dream come true for me. Scott R. Garrels edited Mimesis and Science – Empirical Research on Imitation and the Mimetic Theory of Culture and Religion (Studies in Violence, Mimesis and Culture Series, Michigan State University Press, 2011), which definitely initiates a process of cross-fertilization between scholars concerned with René Girard’s mimetic theory and empirical researchers whose work is devoted to the question of imitation in human development.

I assembled some excerpts from the first part of the book – click to read:

Here are some acknowledgements from the back cover:

“The most exciting and generative new ideas arrive over bridges built between previously isolated fields. Mimesis and Science brings together Girard’s paradigm-changing mimetic theory with a very large literature on human imitation from fields of psychology, cognitive neuroscience, and cultural anthropology. The result is a stimulating set of essays that will advance current perspectives on human nature and human culture.”

– Warren S. Brown, Director of the Lee Edward Travis Research Institute and Professor of Psychology in the Department of Clinical Psychology at Fuller Theological Seminary.

“René Girard has provided us with an incredibly rich theory of human culture: Mimetic Theory. We must look at human nature as it really is, and not as we would like it to be. Girard’s Mimetic Theory is illuminating because it shows that mimesis has the intrinsic potentiality of driving humans to violence. Any serious neuroscientific attempt to shed light on the truest and deepest nature of the human condition cannot neglect this.”

– Vittorio Gallese, Professor of Physiology in the Department of Neuroscience of the School of Medicine at the University of Parma. 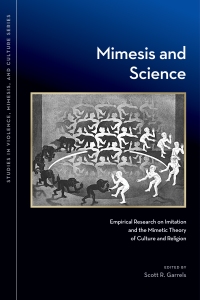 “In the past decade, we witnessed an overturning of the myth of the asocial infant. René Girard is among the thinkers who refused to portray the human from an isolationist perspective. To adapt Girard: Babies hold a secret about the human mind that has been hidden for millenia. They are our double. They have a primordial drive to understand us that advances their development; we have a desire to understand them that propels social science and philosophy.”

– Andrew Meltzoff, Co-Director of the University of Washington Institute for Learning and Brain Sciences.

“In brilliantly original works such as Things Hidden Since the Foundation of the World, René Girard confronts a possibility that most modern social scientists have shied away from: that bloodshed may be at or close to the heart of all human social life. Only a few thinkers have addressed the problem of violence fully and deeply; yet the threat of it pervades our lives as a species, and we cannot learn to deal with it by drawing back.”

– Melvin Konner, Samuel Candler Dobbs Professor in the Department of Anthropology and the Program in Neuroscience and Behavioral Biology at Emory University.