We celebrate Pentecost. It’s a celebration of community. Of Spirit. The ‘Holy Spirit’. When we look at the history of humanity, we’re all too often confronted with a history of violence, bloodshed, sacrifice, disease, disaster and despair. Yet it’s there, in the midst of all the ‘mud’ and the ‘dirt’, that the transformational Spirit of Love is at work. 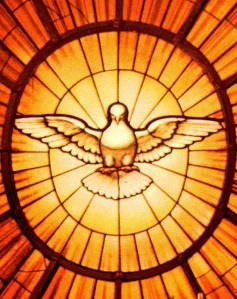 en people are gathered by the Spirit of Love. Here’s what the Girardian Reflections on the Lectionary has to say, guided by the work of James Alison:

If we were to raise the question ‘Why is the Church necessary for salvation?’, the Pentecost text and Alison’s treatment of it could provide a good start on an answer. In the interpretation of original sin guided by mimetic theory, personal fallenness is related to living in a fallen state of human community. The mimetic rivalry that grips each person’s life feeds off of the scapegoating mechanisms that grip human community, and vice versa. Thus, for a person to experience salvation there must also be a re-socialization that transforms the powers of the scapegoating mechanisms into the power of life received through self-sacrifice. As part of Alison’s brilliant laying out of original sin in light of mimetic theory, he devotes Chapter 6 [of The Joy of Being Wrong] to what he calls ‘ecclesial hypostasis,’ a living under the power of community formed around the forgiving victim, Jesus Christ, as opposed to living under the power of the ‘an-ecclesial hypostasis,’ or life under the Generative Mimetic Scapegoating Mechanism, as Robert Hamerton-Kelly calls it.

Alison makes use of the Pentecost story, as remedy to the Tower of Babel story, as a gathering of what has been scattered. In this vein, he also cites Luke 11:23: ‘He who does not gather with me scatters.’ (Note: Gil Bailie in his taped lectures on Luke uses the gathering-scattering motif a great deal in his interpretation of Luke’s gospel, especially over the last several tapes in the series.) Alison concludes:

In the account of Babel … God is still a continuation of the ‘envious’ God of Genesis 3:22. In Jesus’ phrase, however, the essential evangelical work of anthropological de-mythification has been carried out: it is God who founds, and men who scatter. Thus the representation of Pentecost as the undoing of Babel is not only a fulfilment of the prophecies that God would gather his scattered people together. It is a decisive recasting in anthropological terms of human foundational order: The real foundation is God’s foundation of the new people of Israel in Christ. It was not that God had scattered the people of Babel, but their foundational order, one grasped at avidly so as to avoid being scattered (Gen 11:4) was in fact cast in the mode of human scattering. All human societal foundations are futile exercises in the production of a fragile order. The only real foundation is the one given in Christ’s gathering. Behind the New Testament reworking of biblical images there is a quite specific understanding of the universal futility of human social order that is being overcome by the revelation of the true foundation. (p. 167)

I couldn’t resist to share some thoughts with you by an avid reader of James Alison’s work, Rowan Williams, Archbishop of Canterbury. In the following video he comments on the feast of Pentecost. Click to watch:

For more meditation I thought of music by John Dunstable (c.1380-1453), on the poem Veni Sancte Spiritus, in a performance by The Hilliard Ensemble. The poem with translation and some more background information can be read below. It shows how rich the Christian tradition really is. As human beings we belong to a place, a time, history, traditions … We belong to the ‘mud’ as well as to the unexpected beauty that comes out of it, a beauty which is our ‘future’. It’s from this future we belong to, our ‘vocation’ which is there to be loved, that our will receives direction. That’s why Saint Augustine of Hippo (354-430) says “Dilige et quod vis fac” – “Love and then what you will, do” (In epistulam Ioannis ad Parthos; Tractatus VII,8). We are relational beings, and therefore our freedom lies in the maintenance of loving relationships. So much is already given to us before we are able to give ourselves. The beautiful music of John Dunstable is but one of those gifts.

From the Thesaurus Precum Latinarum:

Veni, Sancte Spiritus, known as the Golden Sequence, is the sequence for the Mass for Pentecost. It is commonly regarded as one of the greatest masterpieces of sacred Latin poetry ever written. Its beauty and depth have been praised by many. The hymn has been attributed to three different authors, King Robert II the Pious of France (970-1031), Pope Innocent III (1161-1216), and Stephen Langton (d 1228), Archbishop of Canterbury, of which the last is most likely the author.