I just finished reading the thought-provoking little book Keeping Together in Time: Dance and Drill in Human History, by William H. McNeill. The author experienced the effects of drill exercise and marching together himself during military training in September 1941:

“Marching aimlessly about on the drill field, swaggering in conformity with prescribed military postures, conscious only of keeping in step so as to make the next move correctly and in time somehow felt good. Words are inadequate to describe the emotion aroused by the prolonged movement in unison that drilling involved. A sense of pervasive well-being is what I recall; more specifically, a strange sense of personal enlargement; a sort of swelling out, becoming bigger than life, thanks to participation in collective ritual.” (p.2).

This experience of ‘keeping together in time’ relies heavily on ‘mimetic’ ability, i.e. the ability to ‘imitate’ the movements of others. At the same time, individual rhythm is created by imitating the same movement over and over, as a ‘repetition’. ‘Losing’ your own individuality by bonding with others during a drill exercise seems closely connected to an ecstatic dance experience, as this is described by the late Michael Jackson: 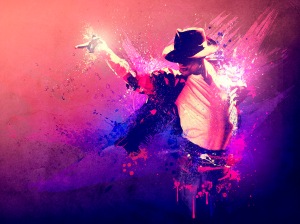 There is a sacrificial element in dancing that is important for the formation of ritual. Dancing prepares individuals to lose their day-to-day consciousness in order to become part of a bigger whole. Dancing creates unity and peace. McNeill refers to the description of a ritual by the African Swazi people:

“The warriors dance and sing at the Incwala [an annual festival] so that they do not fight, although they are many and from all parts of the country and proud. When they dance they feel they are one and they can praise each other.” (p.8).

Sometimes the mimetic (i.e. ‘imitative’) process of dance and drill connects individuals so tightly to each other that they are willing, not only to lose themselves in an ecstatic experience, but also to actually and physically sacrifice their lives. McNeill illustrates this by citing a soldier’s ruminations about what he experienced during war:

“Many veterans who are honest with themselves will admit, I believe, that the experience of communal effort in battle, even under the altered conditions of modern war, has been the high point of their lives… Their ‘I’ passes insensibly into a ‘we’, ‘my’ becomes ‘our’, and individual fate loses its central importance… I believe that it is nothing less than the assurance of immortality that makes self sacrifice at these moments so relatively easy… I may fall, but I do not die, for that which is real in me goes forward and lives on in the comrades for whom I gave up my life.” (p.10). 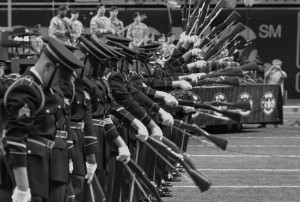 McNeill then points to the close connections between the unity and bonds created by dance, ritual and drill on the one hand, and, on the other hand, the unity enhanced by directing these bonds towards a common enemy in violent and warlike situations:

“Obviously, this sort of merger between self and the surrounding group, attained in the heat of battle, is analogous to the ‘boundary loss’ attributed to dancers. It is also induced by close-order drill, though only in attenuated measure. If so, drill, dance, and battle belong together. All three create and sustain group cohesion; and the creation and maintenance of social groups – together with resulting rivalries among groups – constitute the warp and weft of human history.” (p.10).

In the following chapters McNeill suggests dancing rituals must have played a tremendous role in human evolution, regulating important aspects of community life. It is remarkable, especially if you’re familiar with René Girard’s mimetic theory, how dancing rituals seem to emerge around objects individuals of the same group could fight about – women, territory, food. McNeill describes how hunting could have become more efficient, structured by what Girard would call the pattern of ritual sacrifice – in which participants first lose themselves in the ‘chaotic’ yet community enhancing ecstasy of dance, followed by the commonly approved killing of a certain victim:

“… it seems best to settle for the observation that if Homo erectus bands learned to consolidate sentiments of social solidarity by dancing together, their hunting would have become more efficient. Hunters could, like modern pygmies, rehearse their past successes through dance, mimicking how they ambushed prey, drove it into a trap, or merely prodded it out of its burrow. Such re-enactments, combined with enhanced emotional solidarity provoked by the rhythms of dance, would – like military drill in Old Regime armies – make actual performances in the field more predictable. And, as was also true of such armies, the emotional bonding induced by dance would allow each individual hunter to play his part more bravely, standing firm when an encircled animal tried to break out, and using his stick in time-tested ways to turn it back or head it towards a trap prepared in advance.” (p.30).

McNeill goes so far as to propose the idea that ritualistic patterns, as ‘imitations’, indeed ‘re-enactments’, most likely preceded articulate language and structured future forms of communication. Ritual dance must have sustained communities during times of crisis:

“Dancing… could scarcely be so general if it did not have a positive effect on collective survival by consolidating common effort in crisis situations. The connection is most obvious in war dances, which prepared fighting men for the risks of ambush and battle; but the more general consolidation of sentiment among all members of the community, male and female, old and young, that community-wide dancing induced may well have been more important in maintaining everyday routines and all the forms of cooperative behavior needed for the effective conduct of community affairs.” (p.38).

In other words, dancing must have managed potentially violent situations among members of the same group. One such potentially violent situation concerns everything connected to sexuality, as ‘in the wild’ males tend to fight each other for females. The late Jim Morrison, singer of rock band The Doors, describes how the violent, death (‘thanatos’) oriented side of sexual energy (‘eros’) is somewhat controlled by the ‘cathartic’ power of ritual. The following quote is taken from the book by Stephen Davis, Jim Morrison – Life, Death, Legend (Ebury Press, London, 2005, p.182-183): 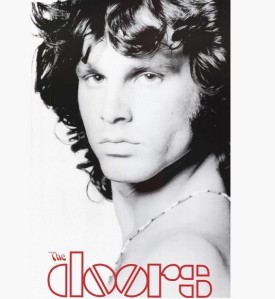 ‘We’re primarily a rock and roll band, a blues band, just a band – but that’s not all. A Doors concert is a public meeting called by us for a special kind of dramatic discussion and entertainment. When we perform, we’re participating in the creation of a world, and we celebrate that creation with the audience. It becomes the sculpture of bodies in action. That’s the political part, but our power is sexual. We make concerts sexual politics. The sex starts with me, then moves out to include the charmed circle of musicians onstage. The music we make goes out to the audience and interacts with them. They go home and interact with their reality, then I get it all back by interacting with that reality. So the whole sex thing works out to be one big ball of fire.’

‘I offer images. I conjure memories of… freedom. But we can only open doors; we can’t drag people through.’

‘Our work, our performing, is a striving for metamorphosis. It’s like a purification ritual, in the alchemical sense. First, you have to have the period of disorder, chaos; returning to a primeval disaster region. Out of that, you purify the elements, and find new seed of life, which transforms all life, all matter, all personality – until, finally, hopefully, you emerge and marry all those dualisms and opposites. Then you’re not talking about good and evil anymore, but about something unified and pure.’

Jim could even make sense when he was dead drunk. Thoroughly loaded, Jim slurred his words in what was supposed to be a major interview with a nervous, intimidated Richard Goldstein. ‘See, the shaman… he was a man who would intoxicate himself. See, he was probably already an… ah… unusual individual. And, he would put himself into trance by dancing, whirling around, drinking, taking drugs – however. Then he would go on a mental trip and… ah… describe his journey for the rest of the tribe.’

Everyone who read this understood what Jim was saying: that the Doors were more than just an act, more than just a rock band. Jim was calling signals, and the wide receivers of the nascent rock culture definitely caught the ball.” 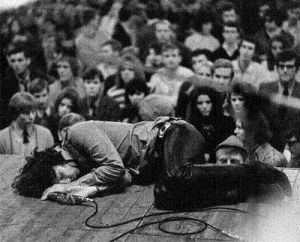 Morrison’s reasoning reflects the strong connection between ‘violence’ and ‘the sacred’, a connection which René Girard worked out extensively in Violence and the Sacred. The Christian Story, Girard argues, unveils the violent mechanisms which produce the sacred, and criticizes the absolute necessity of sacrifice suggested by ‘traditional’ religion.

It is remarkable how William H. McNeill writes a book with insights so similar to those of mimetic theory, yet he never mentions René Girard. For me, this once again confirms the validity of essential claims made by Girard.

To end this post, I invite you to watch yet another compilation I made. This time I combined images of Leni Riefenstahl‘s Nazi propaganda film Triumph des Willens and a video of Michael Jackson. It shows the close connections, discussed by McNeill, between dance, drill and war, or, as Girard would say, between violence and the sacred – idolatry being one of the most important effects of the mechanisms which produce that ‘sacred’.

Please don’t get me wrong. By compiling these images I’m not implying Michael Jackson ever sympathized with Nazi Germany. On the contrary, Michael Jackson seems to absorb the mechanisms which are potentially violent and dangerous to produce some ‘ecstatic’ celebration in the realm of entertainment. After all, he was one of the biggest entertainers of all time. Sadly and tragically he paid the price for that, as he couldn’t escape the sacrificial mechanisms of mass adoration (for more on this, read my post The Church of David LaChapelle).