There’s a remarkable analogy between political, dictatorial regimes that uphold themselves by using violence against dissident voices, and economic behavior that is based on the idea of scarcity. Both social phenomena are tragic in the sense that they accomplish exactly what they are trying to avoid.

Paul Dumouchel and Jean-Pierre Dupuy offered an analysis of modern economics from the point of view of René Girard’s mimetic theory, among others in a book entitled L’enfer des choses. Similar analyses are made by people like Hans Achterhuis (Het Rijk van de Schaarste) and André Lascaris. I’ve tried to summarize what I’ve learned from these efforts so far, as it sheds some interesting light on contemporary international social and political issues – the elimination of Osama Bin Laden being one of them.

To read my essay, click: Tribal tradition or scarcity? 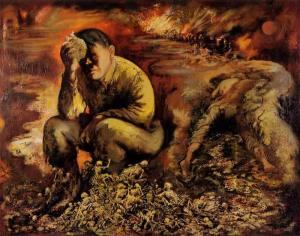 “The rich man glories in his riches, because he feels that they naturally draw upon him the attention of the world, and that mankind are disposed to go along with him in all those agreeable emotions which the advantages of his situation so readily inspire him … In a great assembly he is the person upon whom all direct their eyes; it is upon him that their passions seem all to wait with expectation, in order to receive that movement and direction which he shall impress upon them.”

The direction which, according to Adam Smith (1723-1790), the rich man impresses upon other individuals often has had some shattering consequences for tribal societies and the natural environment. The difference in the way tribal communities deal with the gifts of nature and the way individual capitalists handle with them perhaps never became any clearer during the years of massive buffalo hunting on the great American plains. For centuries the native American indians hunted no more buffalo than they needed and shared what they had caught among the members of their respective tribes. Individual community members didn’t enrich themselves too much, because that would have led to envious quarrels. As is sufficiently known, the business men who originally came from Europe displayed a reverse attitude (imitating ‘the rich man’), which nearly eradicated the mighty animals of the great plains – literally creating ‘scarcity’ of the buffalo. My essay tries to point to the origin of this turn to individualism in Europe. Some of the negative consequences of this shift are shown in these pictures – more than words can say…

This we know: the earth does not belong to man, man belongs to the earth. All things are connected like the blood that unites us all. Man did not weave the web of life, he is merely a strand in it. Whatever he does to the web, he does to himself. 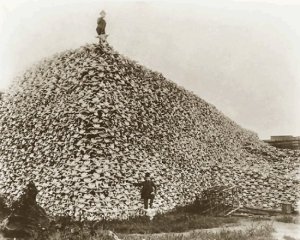 (Bono, singer in rock band U2, from their song Yahweh).