Just recently I stumbled upon quite a fun BBC documentary about monkeys. Fragments can be watched below.

Of particular interest to anyone who’s concerned with mimetic theory are the following observations, eminently shown in the documentary:

Besides getting smarter, monkeys living in larger groups also become more competitive, even aggressive and violent. From the point of view of mimetic theory this comes as no surprise, since an increased learning capacity is based on the same principle as an increased tendency for a certain type of rivalry: imitation or ‘mimesis’. Monkeys learn through imitation, but they can also become rivals through imitation. The latter happens when they imitate each other’s desire for a certain object – be it a female, a piece of food or some favorable territory. It is from this mimetic interplay that a craving for ‘status’ and ‘power’ emerges, as well as a certain ‘greed’.

Individual rivaling monkeys tend to gather allies to compete with each other. Again, the engine behind these forms of empathetic bonding seems to be mimesis by which monkeys are able to ‘project’ themselves in other members of the group. They might even ‘imagine’ what others are up to and make plans for themselves. The so-called mirror neurons in the brain play a tremendous role in this regard.

Normally, rivaling groups balance each other and keep their violent tendencies in check. However, sometimes an individual monkey becomes the victim of a whole group. The documentary shows what happens when this victim dies. His former attackers – actually the ones who murdered him! – gather around the dead body, unusually calm. [WATCH THE DOCUMENTARY FROM 4:23!] 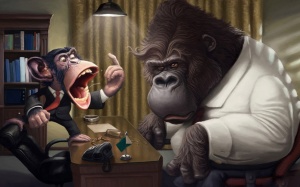 René Girard considers this type of event foundational to the way human culture eventually originated and to the way it developed sacrificial rites. Already the BBC documentary states that more monkeys are victim to other monkeys than to predators. Girard claims that the intra-violence of mob lynching must have occurred even more in primitive ape-man societies, since rivalries must have been more intense there due to an ever stronger mimetic ability. Gradually, our primitive ancestors might have made associations during their experience of killing a common ‘enemy’ that account for the emergence of sacrifice. Aggression, rivalry and turmoil within the group seem to persist for as long as the common enemy lives. From the moment he is dead, contention ceases. ‘Chaos’ no longer reigns. ‘Order’ is restored.

The sacrificial rites of our ancestors suggest that they indeed gave meaning to victims of ‘mob lynching’. According to René Girard, the significance these victims and the mob lynching eventually received, creates the dividing line between animals and humans, and has two aspects:

1. Chaotic situations or crises within a community can be controlled by killing someone – hence the rise of what is eventually called ‘sacrifice’.

2. Chaotic situations are associated with the resurgence of a victim that is held responsible for previous chaotic situations. Indeed chaos reigned for as long as some victim was alive. That victim, therefore, is perceived as ‘being’ chaos – what seems to be beyond the control of the community, as a ‘transcendent’ or ‘sacred’ force. This violent force – i.e. the now divinized and ‘invisible’ victim – can be stopped, as experience seems to show our ancestors, by killing a new victim. So together with sacrifice the potentially violent gods originate who demand that sacrifice.

Very important to understand Girard’s mimetic theory is the observation that the victims of this type of collective violence are scapegoats, meaning: held responsible for something they’re not really responsible for (even when they are, in fact, considered ‘bad’ individuals). The real source for certain types of rivalry, tensions, conflicts and chaotic situations within communities are all sorts of ‘mimetic’ interactions. This is something the first human communities don’t realize, and that’s why, according to Girard, religion and human culture as a whole developed in all kinds of directions from sacrificial origins. Some of these origins can still be observed in groups of our actual ‘family members’, the monkeys and the apes, who, more than ever, seem to mirror fundamental aspects of ourselves.

‘Know thyself’ the Temple of Apollo at Delphi read. Start this quest by watching the fragments from the documentary Clever Monkeys