René Girard’s mimetic theory is heir to a long and widespread Christian tradition of meditating on imitation, more specifically on the imitation of Christ. This tradition is such an essential part of the Christian ‘DNA’, that Christians throughout the ages have dwelled upon it. Not surprisingly then, the wisdom of a famous Medieval Catholic monk – Thomas à Kempis – coincides with the insights of a contemporary Christian rock star – Bono. I found it interesting to organize a meeting between the two. So, here you have it: some excerpts from De Imitatione Christi next to a video fragment of an interview with Bono.

Thomas à Kempis (c.1380-1471) is famous for his spiritual guide De Imitatione Christi – ‘(On) The Imitation of Christ’. These are its first words:

“He who follows Me, walks not in darkness,” says the Lord. By these words of Christ we are advised to imitate His life and habits, if we wish to be truly enlightened and free from all blindness of heart. Let our chief effort, therefore, be to study the life of Jesus Christ.

Christ indeed asks us to imitate him, thereby reorienting our mimetic abilities. Bono, lead singer of rock band U2, tried to follow this call from an early age and always looked for authentic ways to develop his life as a Christian. He tried to follow in the early church’s footsteps:

In school I met some people who knew the Scriptures. It was quite a moment there when people got very interested in the early church and the possibilities of imitating the early church.

Because of certain mimetic tendencies, our ears often remain deaf to these possibilities. All too soon we imitate those who judge us, and we become judgmental ourselves. Answering Christ’s call to ‘follow’ him has to do with finding out the truth about our’selves’ and with the ability to love our neighbour. The evangelical paradox is this: in obeying Christ we don’t lose ourselves but instead we actually find who we are – we become free! Christ represents the realm of grace and forgiveness, where we don’t have to hide our weaknesses and iniquities. This realm is an antidote for the temptation to present ourselves in such a way that we don’t run the risk of being judged. We are often tempted to enslave ourselves to an admirable image (Latin: imago) or to imitate an illusory idol. Bono puts it this way:

The key that great art has in common with Christianity is: “Know the truth and the truth will set you free.” I’ve held on to that very tightly. That’s how I start my day as a writer. I (can) start on a lie… and a lie can be being the person that you’d like to be, rather than the person you are…

If we don’t experience ‘the space of grace’, we will indeed easily lie about our own shortcomings and place the blame on something or someone else – and thus create scapegoats. We are so used to being judged that we judge others in our defense, and so multiply the evil we are trying to avoid. To imitate Christ means to imitate the One who is merciful and by doing so, in turn, free others in becoming and accepting themselves. The dynamic thus created is a dynamic of love which eventually hopes to save the world from the ‘bad’ imitation of ‘an eye for an eye’ violence. Bono also talks about this interruption of ‘the laws of karma’ (i.e. the laws of harmony, balance as well as revenge) by the creative, unexpected and ‘unbalancing’ dynamic of grace and forgiveness:

I’m pretty sure that the Universe operates by the laws of Karma essentially. All physical laws do. What you put out comes back against you. Then enters the story of Grace, which really is the story of Christ, which turned this view of the Universe upside down. And it’s completely counter-intuitive. It’s very, very hard for human beings to grasp Grace. We can actually grasp atonement, revenge, fairness… all of this we can grasp. But we don’t grasp Grace very well. I’m much more interested in Grace because I’m really depending on it. 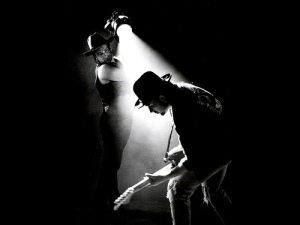 In order to become loving persons – which is the ultimate goal of the biblical enterprise – we first need to accept ourselves as we are. That’s why Thomas à Kempis advises us to temporarily withdraw from a world where we are tempted to keep up appearances by gossip and rumors. From time to time, we need to retreat from ‘the company of men’ in order to distinguish ‘the call of the One who creates us’

Seek a suitable time for leisure and meditate often on the favors of God. Leave curiosities alone. Read such matters as bring sorrow to the heart rather than occupation to the mind. If you withdraw yourself from unnecessary talking and idle running about, from listening to gossip and rumors, you will find enough time that is suitable for holy meditation. Very many great saints avoided the company of men wherever possible and chose to serve God in retirement.

“As often as I have been among men,” said one writer, “I have returned less a man.” We often find this to be true when we take part in long conversations. It is easier to be silent altogether than not to speak too much. To stay at home is easier than to be sufficiently on guard while away. Anyone, then, who aims to live the inner and spiritual life must go apart, with Jesus, from the crowd.

The video fragment of an interview with Bono on ‘faith, hope and love’