In 1952, Scottish-born Canadian film director and animator Norman McLaren (1914-1987) released his hugely acclaimed short film Neighbours. It won both a Canadian Film Award and an Academy Award, and has been designated as a ‘masterwork’ by the Audio-Visual Preservation Trust of Canada. Moreover, in 2009, the film was added to UNESCO’s Memory of the World Programme. Neighbours is a revolutionary piece of art, both in content and in style. McLaren is a master in using the so-called pixilation, an animation technique which treats live actors as stop-motion objects. As for the content, Neighbours can be considered an anti-war statement.

Asked about the inspiration for his film, McLaren answered: “I was inspired to make Neighbours by a stay of almost a year in the People’s Republic of China. Although I only saw the beginnings of Mao’s revolution, my faith in human nature was reinvigorated by it. Then I came back to Quebec and the Korean War began. My sympathies were divided at that time. I felt myself to be as close to the Chinese people as I felt proud of my status as a Canadian. I decided to make a really strong film about anti-militarism and against war.”

The film clearly demonstrates the mimetic origin of rivalry and its escalation into violence. Two neighbours, living together peacefully and enjoying shared interests, become each other’s rivals once they both lay claim on a flower. The film plainly depicts they not only pay attention to this object, but also that they increasingly keep an eye on each other until, finally, the attention for the object completely disappears. As they imitate each other’s claims and try to manifest themselves over against one another, the object is even destroyed during the process.

Neighbours not only ironically reveals that one’s desire for prestige, pride and power is actually based on nothing (but an imitation of another’s desire), but it also shows the tragic and horrifying, shocking outcome of escalated mimetic rivalry. The former friends are tricked into becoming each other’s monstrous doubles. The Latin word praestigia means deception or illusion and it indeed points to the misleading nature of mimetic desire. 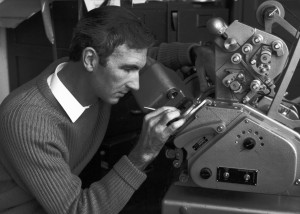 The rock band Extreme made a video for their song Rest in Peace which all too overtly draws on Neighbours. A tribute, nonetheless. Watch it here: