This quote reminded me of a painting by Peter Howson, who converted to Christianity around the year 2000 after battling his alcohol and drug addictions. Christ in the Desert depicts Jesus as he struggles with anxieties and temptations during his ’40 days in the wilderness’. The painting reflects every man’s ‘darkest hours’, and certainly also some dark moments of the painter himself. Peter Howson talked about his ‘rage’ in an interview with The Sunday Times (July 27, 2008). Here are some excerpts:

“Because of my Asperger syndrome I could have ended up murdering someone. I’m capable of it, I know that. When I was drinking I went into very dark places. If you think life is meaningless you think, well, why not go down with a bang.” 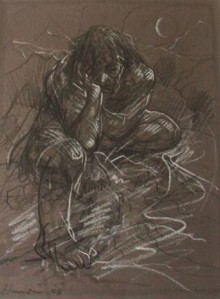 “I used to be very badly bullied at school and when I was a bouncer in a nightclub for quite a few years I changed in a false sense then, and became a bully myself.”

In other words: Howson became the imitator of his persecutors… He followed the mimetic principle of vengeance. He became ‘the old man’, the biblical Cain. Luckily, through painting he gradually managed to move away from his ‘murderous rage’ and to ‘find himself’ in a new way. Yet he will always be watchful of the darkness lurking beneath his newly gained life:

“I can hold myself back now, but the anger will always be there.”

I guess we all have our ‘desert(ed)’ moments…

To watch an interesting interview with Peter Howson, click the following: